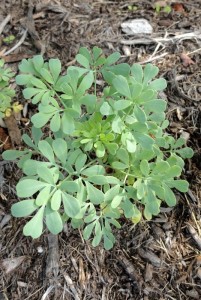 Although used by Old Testament Israelites, the herb rue was never mentioned by Old Testament writers. Luke is the only New Testament writer who told a story about Jesus naming rue: “Woe to you Pharisees, because you give God a tenth of your mint, rue and all other kinds of garden herbs; but, you neglect justice and the love of God. You should have practiced the latter without leaving the former undone” (Luke 11.42 NIV).

In Old Testament time, rue grew wild in fields. When Israelites harvested rue, they weren’t required by Levitical law to tithe on it. By the New Testament era, rue grew in home gardens or was bought in markets; thus, growers and sellers were required to tithe on the plant’s value. The tithe on rue was miniscule, which was a point that Jesus was making to Pharisees.

The primary rue species that grew in Israel was Ruta chalepensis know as African rue and fringe rue. When I researched rue, I learned that R. graveolens is the more common rue, grown world-wide to include in the United States.27 Many characteristics of these two species overlap; however, leaves on the graveolens species appear less dense than on the chalepensis species. Some commentators speculated that the group of three rue leaves was the source for the club suit in decks of English and American playing cards.

Rue leaves taste bitter and when bruised smell pungent. Today, rule is primarily grown for ornamental purposes. Rue is rarely used by United States chefs because of its bitter taste. Not only does rue taste bitter, it can lead to gastric pain and vomiting. Individuals who consumed large quantities died. Exposure to common rue, or herbal preparations derived from it, can results in burn-like blisters on skin.

During the Middle Ages, rue was a common ingredient in witchcraft and spell-making. Rue was a sign of recognition among witches. At one time, the Catholic Church used a rue branch to sprinkle holy water on followers; thus, rue was known as the “Herb of Grace.” Historically, rue was regarded as a protective substance. It was an ingredient in mithridate, a substance used in ancient medicine and folklore. Mithridate was an antidote for every poison and a cure for every disease.

The genus name, Ruta, may be derived from “rhutos,” a Greek word meaning “shield” in view of its history as an antidote. Alternatively, Ruta may come from the Latin word meaning bitterness or unpleasantness. The bitter taste of  leaves led to the rue plant being associated with the verb “rue” which means “to regret.” Pharisees’ teachings were to act as a shield for common citizens of Judea to protect them from any blasphemy against God. Instead, Pharisees’ man-made laws often made the Jews rue or regret their presence in society.

Pharisees missed the point of God’s laws and actions. They had their priorities and their interpretations of God’s laws upside down and inside out. By this time in Jewish history, Pharisees had teachings of Torah and Old Testament prophets. They were aware that God didn’t require 1,000 rams, or 10,000 rivers of oil, or their first-born child as a sacrifice. God wanted men and women to act justly, to extend mercy toward their brothers and sisters, and to love God.

Reflection: Repeatedly, the Bible identified that God is our shield. A shield is defensive armor or someone who protects and defends. Paul instructed Christians to take up the shield of faith, a deep abiding confidence in God. Paul said that with the shield of faith, Christians extinguish the Devil’s flaming arrows.  Name defensive and offensive weapons you have to fight back against  Satan’s fiery darts. If you used each one of these weapons would they be sufficient to protect you from Satan’s wiles and temptations? Any weapons that you don’t need? Name weapons that you need to defend yourself against Satan that God didn’t give you?

To get more information about plants, visit http://www.CarolynRothMinistry.com

Posted in Plants in Christ' Ministry in Perea & Judea