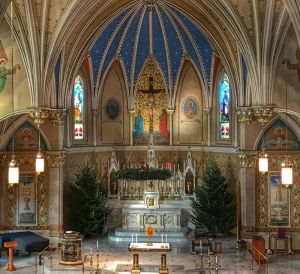 Contrary to popular belief, the Christmas tree was not adapted from ancient European pagan beliefs. The Christmas tree has a younger history than pagan practices of first through third century European tribes who Christian missionaries encountered. Pagan Germanic and Scandinavian tribes initially used the hawthorn or cherry trees or branches in their celebrations.

Most likely use of Christmas trees started with medieval plays popular in the early middle ages (476 AD) to the beginning of the Renaissance (c 1400 AD).  Initially called morality, miracle, and mystery plays, these plays began in churches and taught Bible lessons for everyday life; that is, the plays had a moral. Plays that celebrated Jesus’ birth were linked to the creation story, primarily because Christmas eve was the feast day of Adam and Eve (Tait and Tait, 2008). Over time, the plays became raucous and were moved out of churches into public squares or town centers.

Christian scholars and historians are not sure when evergreen trees were first used as Christmas trees. Evergreen means having foliage persists as opposed to dropping annually. Evergreen trees retain their green or blue-green color throughout the year, rather than changing color according to the seasons. In cold, snowy, dark winters in Europe, evergreen trees were a sign of everlasting life with God.  By the end of the Middle ages, a common legend some Christian’s believed was that when Christ was born, near the shortest day of the year (December 25), every tree on earth produced new green shoots despite their ice and snow coverings. 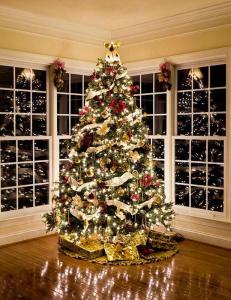 Frequently, churches that understand that Christmas trees are distinct from pagan worship include a 15 – 20-foot tree in their sanctuary. Below the evergreen tree are placed red poinsettia (Euphorbia pulcherrima). What we think of as flaming red petals are actually the leaves of the plant. Poinsettias are a recent addition to Christmas decorations but perhaps years from now will be part of Christmas traditions.