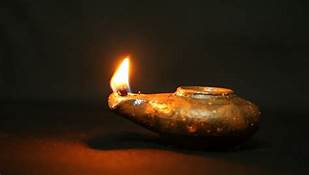 This Light of Mine

The fruit of the olive tree is identified three places in the Tabernacle which was built while the Israelites were camped at Mount Sinai. In all three places, it was olive oil, pressed from olives, which was used.

First, olive oil provided fuel for seven lamps which set on the golden Lampstand in the Tent of Meeting, Holy of Holies (Exodus 40:1 – 5). One lamp set on each of the seven branches of the Lampstand. The Bible does not identify the material used in the construction of the seven lamps. Some authors identified the material as gold – the same substance used in the crafting of the Lampstand.

Other authors suggested that the material was a type of clay used in pottery. Small pottery lamps were found at ancient Israeli archeological sites around the time of the Exodus. The lamps were open rimmed in contrast to later New Testament lamps which had a central hole into which olive oil was poured and a short spout which contained the lamp wick. In the open bowl-type lamp, one side was pinched narrow into a spout like protrusion. The wick extended from the spout side of the lamp. God told Moses to have the Israelites bring clear oil of pressed olives for the Lampstand lamps (Exodus 27:20-21). The high priest, Aaron, was to tend the lamps so that they burned continually before the Lord from evening until morning.

The second place that olives were used in the Tabernacle was in the Bread of the Presence. The Presence Bread (Showbread) was a type of grain offering. God described meticulously that all grain offerings (Leviticus 2:1 – 16) should be prepared/offered with olive oil.

The third place that olive oil was used in the Tabernacle was as an ingredient of the anointing oil (Exodus 30: 22-32). God decreed that Moses use anointing oil to anoint and consecrate (to God) every part of the tabernacle, the priests, and the priest’s clothes. The anointing oil, described in detail, consisted of fine spices and a hin (3.7 liters or 1.5 gallons) of olive oil. The anointing oil was to be God’s sacred anointing oil for future generations. If anyone made perfume using the same formula and put it on other than a priest, he/she was to be cut off from the Children of Israel.

The olive tree is the second plant mentioned in the Bible and one of the world’s oldest cultivated trees.  Archeological evidence suggests that the olive tree was first domesticated in the 4th millennium B.C.  The wild Mediterranean olive is the most likely progenitor of today’s cultivated olive, Olea europaea. Some scholars identify the olive as indigenous to present day Israel and Syria; while others claim North Africa or Crete as homes of the first olive trees. In all probability there were wild olive trees growing in the Sinai Peninsula when the Children of Israel traveled there in 1446 – 1406 B.C. Olive trees are long lived, up to 1000 years. They are evergreens that grow to a height of 65 feet with spreading branches that form a dense crown or canopy.  In Old Testament times, youth used long sticks to shake olive tree branches with the result that ripe olives fell to the ground. To obtain small quantities of clear olive oil such as used in anointing oil, olives were gently squeezed — so that no parts were crushed.

When we think of the symbolism of the olive tree, we associate the olive branch or leaf as symbols of peace and prosperity. This symbolism comes from the Greeks where the olive tree was the sacred tree of goddess Athena. Athens, the capital of Greece, took its name from the goddess. In the Old Testament olive trees, branches and olives are not associated with peace or prosperity. In Exodus and Leviticus, the Hebrew word for olive tree, olive, and olive oil is zayith; zayith means an olive, as yielding illuminating oil.  Another Old Testament word for olive is sheman, meaning to shine or anoint.

The writers of the Old Testament Psalms repeatedly told the Israelites then and Christian’s today that God is our light (Psalm 27:1,Psalm 89: 15, Psalm 119: 105). In the New Testament, Christ is described or describes himself as the light of the world and of men (John 1: 4, John 8:12, John 12:46). In the Old Testament, the Israelites were to reflect God’s light to the surrounding nations (Isaiah 42:6, Isaiah 49:6). Today, Christians are called to take Christ’s light into the world. Christ said “you are the light of the world…. let your light shine before men that they may see your good deeds and praise your Father in heaven” (Matthew 5: 14 – 16). St Paul wrote “you are light in the Lord. Live as children of light (for the fruit of light consists of all goodness, righteousness and truth)” (Ephesians 5: 8 – 9).

One of the saddest stories in the Bible involves the lamps of the golden Lampstand (I Samuel 3: 1- 4). The Children of Israel are now in the Promised Land and the Ark of the Covenant and the golden Lampstand are at Shiloh. As the chief priest, Eli has the task of preparing and lighting the seven lamps each evening. The story is set early one morning before sunrise. Samuel recorded a small sentence, “The lamp of God had not yet gone out” (I Samuel 3:3). That the lamps burned low or burnt out before morning means that Eli did not prepare the lamps with sufficient olive oil or wick length so that the lamps would burn through the night until morning. The lack of illumination before the Table of the Presence symbolized spiritual dimness in the lives of priests and Israelites. Both were neglecting God; consequently, their lives were not filled with the light of His presence. In this same vignette, Samuel wrote “in those days the word of the Lord was rare; there were not many visions” (I Samuel 3:1). There could be no illumination (words or visions) from God when the priest and people were neglecting or disobeying Him.

As olive oil lamps shined on the Presence Table in the Tent of Meeting, Christians are illuminated by Christ and they reflect Him in a dark world. If our light dims or burns out, how will Christ be seen?

Reflection. So what about you? Is you light burning for Christ, or has your light grown dim?