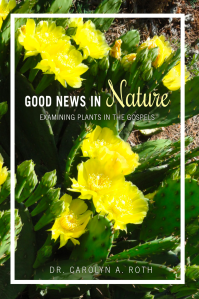 Published book on plants Jesus encountered and used in his ministry on earth.

Purchase at http://www.CarolynRothMinistry.com or on Amazon. 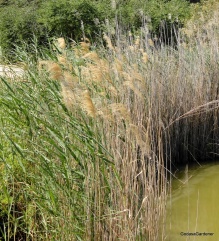 John the Baptist’s public ministry lasted one-to-two years. Jesus went to John to be baptized. Baptizing Jesus was the high point of John’s ministry. Then, King Herod Antipas arrested John and imprisoned him at Machaerus, a walled fortress with special quarters for political prisoners. When King Herod arrested John, the ostensible reason was that John criticized Herod for divorcing his powerful Nabatean wife.

Although King Herod used a personal reason for imprisoning John, getting John out of circulation made political sense. John mandated that individuals, who came to him for baptism, change their behavior.  John advocated economic changes that influenced King Herod’s income. For example, John told tax collectors to collect only the amount of money required by Rome. They should stop lining their pockets and those of King Herod by over-taxing citizens. Soldiers must be content with their pay and stop extorting money from individuals. John had tremendous influence with people in Herod’s kingdom. According to the first century historian, Josephus, Herod feared that John, with his widespread support from the common people, would instigate rebellion against him.5

After John was in prison perhaps 15-18 months, he sent two disciples to Jesus. They asked Jesus if he was the expected Messiah, or if they should look for someone else (Luke 7.19). Jesus didn’t give the disciples a direct “Yes” or “No” answer.  Instead Jesus told the disciples to go back to John and report what they saw and heard, i.e., the blind received their sight, the lame walked, lepers were cured. After John’s messengers left, Jesus asked the crowd what they expected when they went to see John in the desert. Jesus contrasted John the Baptist’s behavior with a reed that blew in the wind, swaying first one way than another.

The reed that Jesus referred to when talking about John was the Arundo donax, known as the giant reed or the Cypress cane. Reed colonies were located on the banks of natural water courses, in floodplains of medium or large sized streams, and in dry river banks far from permanent water sources. Reeds grew throughout Israel from Mount Hermon to the Negev Desert. 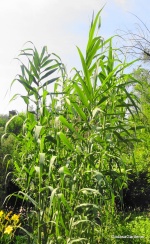 Giant reeds are perennials; they regrow year-after-year. Reeds  reach a height of 20 feet and may grow 10-12 feet in a single season. In frost areas, reeds are smaller. Often, they die back in winter, only to regrow in spring. Like bamboo grass, the giant reed spreads readily. Roots are thick, knobby rhizomes. In nature, this reed often propagates by rhizomes breaking from the main root stock, moving through the water, and taking root in a new location. The central reed stalk is called a culm; culms are about 1 ½ inches in diameter and hollow. Each culm has many leaves that resemble corn stalks; however, leaves have sharp edges that can cut fingers.

Culms and leaves are green in spring and early summer. As drier weather prevails, foliage turns light brown and rattles in the wind. Giant reeds bend with the wind, even when they grow in large colonies. In ancient times, reeds were used to check soil erosion and functioned as wind breaks.

Jesus asked the crowd if they expected to see a reed swaying in the wind when they went out to see John the Baptist. In New Testament times, individuals knew about reeds.  At a minimum, they saw reeds growing along the Jordan River. To them reeds elicited mainly positive thoughts. Perhaps, they remembered how Isaiah associated reeds with humility (Isaiah 58.5).

Jesus denied that John was a swaying reed. John was firm and upright, unlike a reed that swayed in the wind. Jesus averred that John’s beliefs were firm, and he lived by them. John stayed on message (repentance) and on task, (baptism). John didn’t have a politically correct bone in his body. He didn’t pander to public opinion, giving one message to common people and a second one to the rich and powerful. John called the Jerusalem elite “a brood of vipers.” Nor, was John silent when King Herod divorced his first wife, Phasaelis, to marry his brother’s wife, Herodias.  Instead, John labeled Herod an adulterer.

Despite Jesus denying that John was a swaying reed, John’s behavior reflected how reeds were used in ancient Judea and Galilee. By his words and life, John stood against the erosion of godly living. He called ordinary citizens, tax collectors, and civil and religious leaders to a life changed to reflect God’s standards.

Like reeds used as windbreaks, John stood as a buffer between people who were righteous and the secular society of the Roman Empire. The best windbreaks lower wind chill in man, animals, and plants. Everything we know about John the Baptist showed a priest and prophet who lived close to God. As a windbreak John, lowered the chilling effects of the secular Roman society on inhabitants of Galilee and Judea.

Jesus’s comments on John the Baptist included a eulogy for John. In addition to commendatory words given at a memorial service, eulogy means “high praise.” Although John was still alive, Jesus eulogized him by saying of all men (and women) born of woman, there was none greater than John the Baptist. John wasn’t a weak reed, or as we would say in the 21 century, John the Baptist wasn’t a “shrinking violet.”

Reflection: What about you? Do you bend and sway with all types of adversity?

Posted in Plants in Christ' Ministry in Perea & Judea