Myrrh, The Gift in Death

Myrrh is mentioned as a valuable trade item in Revelation 18:13.

John listed myrrh as a commodity no one would buy after Roman fell. The myrrh plant is one of the last plants listed in Revelation; yet reference to myrrh began early in Bible history. In Genesis (37:25), Joseph was sold to Ishmaelites who included myrrh in their trade caravans. Myrrh was a component of the anointing oil used in the Tabernacle (Exodus 30:23). Esther (2:12) completed a 12-month beauty treatment, which included myrrh, before she was taken to King Ahasuerus (Xerxes). Myrrh perfumed the robes of a king (Psalm 45:8) and the bed of an adulteress (Proverbs 7:17). Myrrh was catalogued seven times in Song of Songs to describe the Lover, the Maid (Bride), and Solomon’s gardens.

Christians associate myrrh with the birth of Jesus (Matthew 2:11). The wise men who traveled from the East to Bethlehem offered Christ gifts of gold, frankincense, and myrrh. By tradition, gold symbolized Christ’s kingship, frankincense his deity, and myrrh his death.

Myrrh was  present at Christ’s burial. Following the crucifixion and death of Jesus, Joseph of Arimathea and Nicodemus wrapped Jesus’ body in linen perfumed with about 75 pounds of myrrh and aloes (John 19:39). Then, they laid Jesus’ body in a tomb carved in rock.

Different species of plants were used to make myrrh in different countries. The myrrh described in the Old Testament was likely a different plant from the New Testament myrrh. Most myrrh in Imperial Rome came from the Commiphora myrrha plant; however, in Israel the plant used to make myrrh was the Commiphora abyssinica plant. Arguably, John thought of Judean myrrh when he referred to myrrh in Revelation.

The Israelite myrrh plant is the Commiphora abyssinica, which has several other names, to include Commiphora habessinica, myrrh tree, Arabian myrrh, and Yeman myrrh. The Hebrew word for myrrh is môr or môwr which means bitter, possibly because myrrh has a bitter taste (Strong, 2010). The Israeli myrrh was indigenous to Ethiopia or possibly Southern Arabia and Yemen. As early as 1900 B.C. caravans carried myrrh to Egypt where it was used in the embalming process. Around 1876-1880 B.C., Jacob described myrrh as one of the best products of Canaan and directed his sons to take myrrh to Egypt to trade for grain (Genesis 43:11-14). In present day Israel, the myrrh tree grows in the Biblical Landscape Reserve (Neot Kedumim).

The myrrh plant is a shrub or small tree that grows 20 feet tall with a trunk that can be as tall as 13 feet. In Israel, myrrh trees grow as a woody perennial. Although often referred to as a spice, myrrh is the dried resin from the myrrh tree. When the resin is harvested, lateral cuts are made on the trunk or branches. An aromatic gum resin exudes from the wounds. When the resin is exposed to the air, the gum hardens forming irregular shaped yellow or brown globules. The globules smell pleasant but have a bitter taste.

We saw myrrh in the bazaar in the old city of Jerusalem. The myrrh was in sharp-edged, marble-size pieces. Myrrh continues to be used today as sweet smelling incense for religious celebrations. 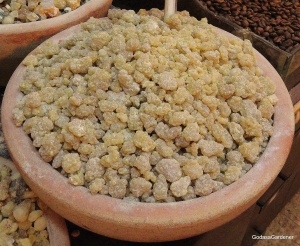 By tradition, myrrh symbolized both death and gifts. Jesus dead body was wrapped in linen and myrrh. The wise men gave the gift of myrrh to the baby Jesus. According to the writer of Hebrews, the original gifts, animals, food, drink, that Israelites brought to the Tabernacle and Temples were not able to clear the conscience of worshipers (Hebrews 9:9-10). Although the gifts met Tabernacle and Temple regulations, they were only external regulations applied until the new order came.

The new order was Jesus being sacrificed on the cross for sins. Christ gave his life as a gift for humankind. In turn, the gift that Christ wants from each of us is that we belief in him as risen Savior. When we belief in Christ as Savior, we accept God’s gift of his son and Christ’s gift of his life.

Reflection: What do you do when you receive a gift? Have you ever been embarrassed by a gift and not wanted to claim it? What is your response to the ultimate gift from God — his Son?

Posted in Plants in the Early Church