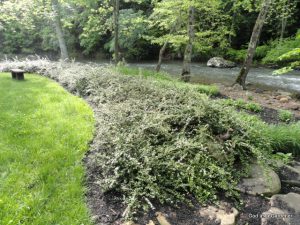 Isaiah chapter 34 is titled “Judgment Against the Nations” in the NIV Bible.  In God’s description of judgement against Edom, he says, “Thorns will overrun her citadels, nettles and brambles her strong holds. She will become a haunt for jackals, a home for owls” (Isaiah 34:13). The point that God is making is that Israel (and Judah) who trusted other nations for their defense rather than God would be overrun and destroyed. Equally true, the nations in which Israel put her trust would be overrun. Having thorns, nettles, and brambles overrun strongholds implies that people no longer living in these citadels and strongholds. If an individual were to enter these once well-populated, supposed secure areas, they would see jackals slinking around. At night owls that lived on rats and other rodents would hunt there.

Often the Bible bramble is a fast-growing, rough, and prickly shrub of the Rubus Family of plants. This Family contains blackberries and raspberries. Although both are good to eat, the bramble identified in Isaiah most likely was not one that produced any human food. They were just that – brambles that would have to be removed for people to live in the area.

This photograph of a bramble it one that grows here in the mountains of Roanoke. It is called the cotoneaster (Cotoneaster frigidus) and in the Rosaceae (think rose) Family. I first remember seeing it when I was fishing in the Appalachian Mountains near Paint Bank, Virginia. It grew as a very thick hedge 3-4 feet tall. However, my neighbor has two cotoneaster bushes in his front yard that are about 12 feet tall. He planted them both sides of his front walk.  We live here in the Roanoke Valley (Plant Zone 7 a).  Cotoneaster had its origins in China.

Cotoneaster flowers are light white or light pink and bloom in May in the mountains. It is September, and my neighbor’s cotoneaster still has beautiful flowers. I purchased two cotoneasters and Bruce planted them at church in our Bible garden. They will get afternoon sun. Hopefully, they will make it through our winter.

What we can learn

I didn’t receive any consolation or encouragement from Isaiah’s words. My thoughts were that the United States has put her confidence in politics, money, military; rather than God. We have even built strategic alliances with other nations, NATO, OAS, etc. Yet, look what happened to ancient Israel when she did that. Where are our heads both as individuals and as a nation?

If I allowed myself, I could get depressed; however, I must always remember two things: 1) God is sovereign and 2) God  expects me to do my part to promote him and his kingdom. In the Fellowship of the Ring, an elf says something to the effect, “we fight the long defeat” (Tolkein). Like the elf character, I must continue to fight; but ultimately, I fight the long victory.

Reflection: Why did Isaiah write this Chapter? How can we see it as victory?

If you want to learn more about Bible plants, visit my website: CarolynRothMinistry.com