First century Palestinians made clothes from linen and cotton in addition to using animal hides and fleece.  Both linen and cotton were made from plants, with linen the more valuable material.  Linen was used almost exclusively for wrapping bodies of dead individuals. Israelites didn’t cremate their dead. Rather, they interned them in a cave or crypt.

According to Mosaic Law, a dead body had to be buried or entombed the day the individual died or was killed, so the land wasn’t defiled (Deuteronomy 21.23). At the same time, two other Mosaic laws were applicable: First, a man couldn’t work on the Sabbath. Preparing a body for burial was work. Second, an individual who touched a dead body was ceremonially unclean for seven days (Numbers 19.11). Devout Jews internalized these law; thus, Joseph of Arimathea asked Governor Pilate for the body of Jesus as soon as Jesus died. Because Jesus died at about 3:00 p.m. and because the Sabbath begun about 6:00 p.m., Joseph had a three-hour window of opportunity to prepare and intern Jesus’s body. Joseph and his helper, Nicodemus, both devout Jews, knew that they would be unclean for seven days because they touched Jesus’s dead body.

Nicodemus supplied 75 pounds of aloes and myrrh to infuse Jesus’s grave cloths. While Jesus lived, his clothes were made from cotton or wool. Linen would have been a luxury item for an itinerate rabbi (Luke 16.19).  After his death, I don’t believe Jesus cared if he was wrapped in linen cloths or simply cotton rags, as his mother used for swaddling cloths at his birth.

One Bible scholar11 wrote that first century Jews wrapped the corpse’s body with a wide long cloth beginning at the feet and ending with the head.  This perspective contrasts with John’s description of Lazarus, when he came out of the grave. John wrote that when Lazarus came out of the grave, his hands and feet were bound with perfumed linen strips, and his face wrapped with a cloth (John 11.44). Logic suggests that Jesus was wrapped for burial in the same manner as Lazarus.

The gospel writer, John, identified that Jesus was wrapped in linen cloths, not in a linen cloth. As I pondered the proposal that Joseph and Nicodemus buried Jesus in a single piece of linen, I remembered 30 years ago when I practiced nursing. Part of the care of a deceased body in the hospital was wrapping it in a single sheet of cloth and tying this “shroud” around the body. Only then, was the body transported through the hospital halls to the morgue. Perhaps, Jesus was wrapped in strips of linen cloths, then wrapped in a shroud.

In New Testament Greek, words for linen (bussos, sindōn) generally, translated as “fine linen.”1 Fine linen cloth was associated with coverings in the tabernacle and with Israelite priests’ robes. The ancient Hebrew word for fine linen, was shêsh. Shêsh denotes a type of linen of peculiar whiteness and fineness.

In the ancient Near East, the flax plant (Linum usitatissimum, was used to make linen.  In Biblical times, flax was the most important fiber crop. Although flax may have originated in Mesopotamia, it was extensively cultivated in Egypt and less so in Palestine.  In Egypt flax grew along the sides the Nile River, particularly the Nile Delta region. In Egypt and the Middle East, flax was planted in the early winter and harvested in the spring. Egypt exported linen cloth and linen threads to Palestine in the first century.

The flax plant has a single stem that grows up to 4 feet tall.  The fiber is in the stem.  Initially, the stem is green, but turns yellow as the plant ripens and readies for harvest. When flax plants were harvested for fiber, mature plants were pulled up by their roots. Harvested plants were allowed to dry, then retted.  Retting is a process of soaking flax to separate the fiber from the woody tissue (straw).  Fibers were spun, then woven into linen cloth. Ancient people dyed some linen threads.

Have you ever wondered why each of the gospel writers recorded something about Jesus’s body being wrapped in grave cloth/cloths? Wouldn’t it have been easier to stop with Jesus’s death?  We are given all the detail about Jesus’s body being wrapped in linen grave cloths and then possibly in a shroud so that we believe absolutely that Jesus died on the cross. His corpse was treated the way all dead Jews were treated.

Reflection: Will it matter what you are wrapped in at your death?

Posted in Plants in Holy Week

Jewish law and custom required immediate burial of Jesus’ dead body. Mosaic Law required that Jews bury the body of a man put to death by hanging on a tree the same day he died (Deuteronomy 21:22-23). The reason for this Mosaic requirement was so that the land not be desecrated by a dead body remaining unburied. The book of Tobit (Apocrypha, 2009) described the value Jews placed on seeing that all slain Jews had a proper burial even when the Jews were in exile.

Joseph of Arimathea was a prominent member of the Jewish council who believed that Jesus was the Messiah. Boldly, Joseph went to Pilate and asked for Jesus’ body. After confirming with the centurion that Jesus was dead, Pilate released Jesus’ body to Joseph. Along with Nicodemus, Joseph took Jesus’ body from the cross. They wrapped the body in linen stripes and 75 pounds of mixed aloe and myrrh. The Jewish burial custom of using spices in burial linens was associated with covering the smell of the decaying body.  Because aloe had little odor, possibly the aloes were used to “fix” or hold the scent of the myrrh.

Near the place where Jesus was crucified, Joseph had a tomb cut out of the rock (Matthew 27:59-60). The new tomb was to be Joseph’s burial site; however, it was to this tomb that Joseph and Nicodemus took Jesus’ body for burial. After laying Jesus in the tomb, they rolled a large stone against the entrance to secure it. Mary, the Mother of Jesus, and Mary Magdalene were present and saw where Jesus was buried.

The aloe of the New Testament is the Aloe vera also known as the Aloe barbadensis, Aloe vulgaris (common aloe) and the medicinal aloe. Some sources identified the aloe as the oldest medicinal plant. The aloe is distributed in Mediterranean woodlands and shrub-lands in hard rock outcrops including maritime sands. We saw aloe plants growing in the southern Negev Desert area in Kibbutzim Lotan and Ketura. The aloe requires full sun and can’t grow in the shade. It can grow in nutritionally poor soils and prefers sand and loam. Adult plants are drought tolerant. Aloe vera is an evergreen, perennial succulent with a strong fibrous root. When aloe is harvested for its medicinal gel, older leaves are harvested as they are larger and contain more gel. 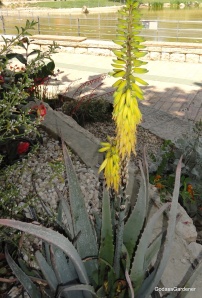 Symbolism: Healing
Traditionally, aloe has been associated with healing.  In the book of Isaiah (Isaiah 53:5, NIV, 2002) we read these prophetic words about Christ, “But he was pierced for our transgressions, he was crushed for our iniquities; the punishment that brought us peace was upon him, and by his wounds we are healed.” Jesus body was dead; therefore, aloes weren’t used to heal him. The healing aloes in Jesus’ burial cloth exemplified Jesus’ continued healing of us even after his physical death.

After Jesus’ resurrection some individuals in Judea and the Roman Empire accepted healing from Jesus. Other individuals weren’t willing to be healed. Some couldn’t comprehend that a man would die for their sins. Others simply didn’t believe that they were all that bad; why would someone need to die for their few sins? For still others it was easier to continue their same religious observances, e.g., make an animal sacrifice or give a little money into a treasury, than to accept a new way of thinking.

The rationale and rationalizations that individuals used 2,000 years ago for not accepting healing from Jesus are the same ones that individuals use today. On Sunday morning in church, we pray the “Prayers of the People.” Frequently, there are prayer requests for healing – surgery, diagnostic tests, cancer – from members of the congregation. I’m always surprised that congregates don’t offer more prayers for loved ones’ spiritual healing. My dear friend isn’t a Christian; I love him so much. From time to time, I ask congregates to pray that he comes to a saving knowledge of Christ. I really should ask them to pray for him every Sunday.

Posted in Plants in Holy Week