Do you want to live forever?

Genesis 6.9-22: Noah was a righteous man, blameless among the people of his time, and he walked faithfully with God. Noah had three sons: Shem, Ham and Japheth. Now the earth was corrupt in God’s sight and was full of violence. God saw how corrupt the earth had become, for all the people on earth had corrupted their ways.So God said to Noah, “I am going to put an end to all people, for the earth is filled with violence because of them. I am surely going to destroy both them and the earth. So make yourself an ark of cypress wood; make rooms in it and coat it with pitch inside and out. This is how you are to build it: The ark is to be three hundred cubits long, fifty cubits wide and thirty cubits high.Make a roof for it, leaving below the roof an opening one cubit high all around. Put a door in the side of the ark and make lower, middle and upper decks. I am going to bring floodwaters on the earth to destroy all life under the heavens, every creature that has the breath of life in it. Everything on earth will perish. But I will establish my covenant with you, and you will enter the ark—you and your sons and your wife and your sons’ wives with you.You are to bring into the ark two of all living creatures, male and female, to keep them alive with you. Two of every kind of bird, of every kind of animal and of every kind of creature that moves along the ground will come to you to be kept alive. You are to take every kind of food that is to be eaten and store it away as food for you and for them.” Noah did everything just as God commanded him.

Noah was over 500 years old when God told him to build an ark, a giant water-proof vessel. The ark saved Noah, his family, and animals from a flood that destroyed the known world. The ark was rectangular (450 feet long, 75 feet wide, and 45 feet high).

Most of us remember seeing pictures of the ark from childhood Bible story books. The front (prow,  bow) of the ark was pointed. Sometimes, the back (stern) was pointed. In reality, the ark didn’t have a prow or stern. It didn’t move forward through the water while being steered by a rudder. Instead, the ark was built to floated on the top of the water. 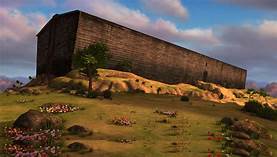 Noah used cypress wood, also called gopher wood, to build the ark. I’m not sure why Noah used gopher wood; but, surmise it had something to do with the long, central tree trunk. Using a long piece of wood reduced the number of trees Noah had to cut down. Also, cypress wood contains resins which prevents wood from absorbing water, which could sink the ark. Cypress wood’s odor makes it unattractive to insects, such as wood termites, which could destroy logs.

In the past centuries, gopher wood became associated with immortality. In the upward tip of the columnar-shaped cypress tree and in every shoot and leaf, cypress branches and needles point upward to immortal life with God.  Today in ancient near east areas, cypress trees are often planted in cemeteries where they denote immortality.

Receiving immortality from God doesn’t absolve men and women from acting right (or righteously). The Bible is the ultimate “self-help” book for a successful life. The Bible tells us (believers and non-believers) how to have immortal life with God. In reality, every individual’s life will have immortality. The question is where we spend that immortal life. By our choices in this physical life, we decide where we will spend our immortal life.

Reflection: How much time do you spend each day reading the Bible, the Christian’s self-help book?