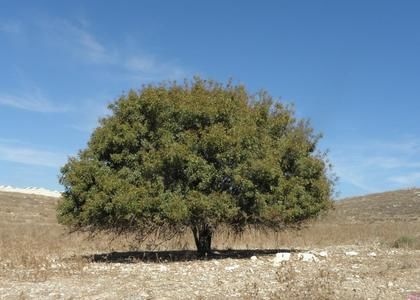 Genesis 12.1-7: The Lord had said to Abram, “Go from your country, your people and your father’s household to the land I will show you. I will make you into a great nation, and I will bless you; I will make your name great, and you will be a blessing. I will bless those who bless you, and whoever curses you I will curse; and all peoples on earth will be blessed through you.” So Abram went, as the Lord had told him; and Lot went with him. Abram was seventy-five years old when he set out from Haran. He took his wife, Sarai, his nephew Lot, all the possessions they had accumulated and the people they had acquired in Haran, and they set out for the land of Canaan, and they arrived there. Abram traveled through the land as far as the site of the great tree of Moreh at Shechem. At that time the Canaanites were in the land. The Lord appeared to Abram and said, “To your offspring I will give this land.” So he built an altar there to the Lord, who had appeared to him.

God called Abram to leave Haran and travel to Canaan. There, God promised to make Abram the father of a large nation. Abram didn’t worship God when God called him. In fact, Abram worshiped the gods of the Chaldeans; yet, Abram complied with this strange new God’s direction.

Abram was approximately 75 years-of-age and childless. He had been married for decades. I believe that part of Abram’s motivation for following God’s direction was God’s promise that Abram would be the father of a nation. This promise implied that Abram would sire at least one son.

When Abram reached Canaan, Abraham stopped at the great tree of Moreh in the vicinity of Shechem. There, Abram offered a sacrifice to God. Some of the underlying motivation for his sacrifice at Moreh could have been Abram telling God, “I’m here in Canaan; now remember your promise.”

Notice, the Bible’s description was of a tree, not trees. Modern-day Bible scholars believe the tree was a terebinth. Normally, the terebinth tree tops out at 33 feet; however, this tree may have been larger than the norm.

In the ancient near East, terebinth trees didn’t grow in groves or groups.  Usually, they grew alone without other trees around them; thus, were seen from far distances and/or used to identify locations. Abram was the first Israelite patriarch. Similar to the terebinth growing alone, Abram and his family traveled to Canaan alone.

One feature of the terebinth tree is its deep root system. Botanists claim that the tree’s deep root system gives it stability. Abram’s root system was God. Abraham was willing to be planted where God wanted him even if he was the only one of his nationality in Canaan.

Reflection: What is your root system? What makes your life stable? Are you rooted in God?

This entry was posted in Plants & the Ancient Fathers and tagged Abraham, Bible Study, Canaan, God as a Gardener, Meditation, terebinth tree. Bookmark the permalink.