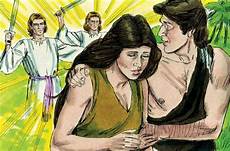 Genesis 3.17-20: To Adam he (God) said, “Because you listened to your wife and ate fruit from the tree about which I commanded you, ‘You must not eat from it,’ “Cursed is the ground because of you; through painful toil you will eat food from it all the days of your life. It will produce thorns and thistles for you, and you will eat the plants of the field. By the sweat of your brow you will eat your food until you return to the ground, since from it you were taken; for dust you are and to dust you will return.”

After Adam and Eve’s rebellion, the world, including plant life, became subject to death. Because of Adam’s disobedience, God cursed the ground. From that point to the present time the entire creation groans (Romans 3.22-23). Creation’s groaning will continue until the redemption of human bodies at the end of the ages.

After God cursed the ground, Adam toiled (worked, sweated) to raise vegetables and grow fruit to feed his family. As Adam and his offspring plowed and planted crops, some plants became weeds. The most troublesome weeds were thorns and thistles.

Scholars don’t know which thistle grew first when Adam tilled the soil. The milk thistle, called St. Mary’s thistle, is widespread around projected locations of the Garden of Eden and a likely candidate for the first thistle.

In the Genesis story, the symbolism of thistles is consequences. Consequences are the direct outcome of an action or its end result. Adam and Eve’s disobedience and rebellion against God’s direction to not eat from the tree of knowledge of good and evil resulted in consequences to their lives, to their livelihood, and to planet Earth.

When the serpent tempted Adam and Eve, they could have responded differently. What would have happened if Adam and Eve (as a couple) discussed possible consequences of eating from the tree of knowledge of good and evil before they took the first bite of its fruit? Perhaps, they would have eaten the fruit; but, perhaps they would have decided not to eat the fruit as they contemplated alternative actions.

Consider ways that you rebelled against God, i.e., how you disobeyed his statutes. List alternative ways you could have behaved in some of these situations had you thought longer.

Reflection: What are some consequences you experienced from your rebellion against God?

This entry was posted in Plants in Creation & Eden and tagged Adam and Eve, Bible Study, Carolyn Roth Ministry, Consequences, Garden of Eden, Gardening Genesis, God as a Gardener. Bookmark the permalink.