What should I wear today? 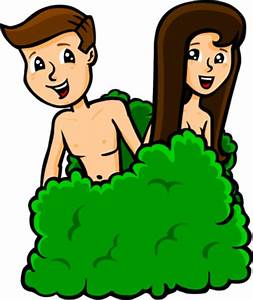 Genesis 3.1-10: Now the serpent was more crafty than any of the wild animals the Lord God had made. He said to the woman, “Did God really say, ‘You must not eat from any tree in the garden’?” The woman said to the serpent, “We may eat fruit from the trees in the garden, but God did say, ‘You must not eat fruit from the tree that is in the middle of the garden, and you must not touch it, or you will die.’ ” “You will not certainly die,” the serpent said to the woman. “For God knows that when you eat from it your eyes will be opened, and you will be like God, knowing good and evil.” When the woman saw that the fruit of the tree was good for food and pleasing to the eye, and also desirable for gaining wisdom, she took some and ate it. She also gave some to her husband, who was with her, and he ate it. Then the eyes of both of them were opened, and they realized they were naked; so they sewed fig leaves together and made coverings for themselves. Then the man and his wife heard the sound of the Lord God as he was walking in the garden in the cool of the day, and they hid from the Lord God among the trees of the garden. But the Lord God called to the man, “Where are you?” He answered, “I heard you in the garden, and I was afraid because I was naked; so I hid.”

Originally, mankind was created with free will. Adam and Eve could choose to obey or disobey God. While they obeyed God, they lived sinless lives and were destined to live eternally. In their innocence, neither Adam nor Eve wore clothes; but, they weren’t embarrassed by their nakedness.

After eating fruit from the tree of knowledge of good and evil, Adam and Eve became aware that they could act rightly (for good) or wrongly (for evil). Everything changed in their lives; they lost their innocence and sinlessness.

Adam and Eve became aware that they were naked. Adam was embarrassed for Eve to see his nakedness. Eve was embarrassed for Adam to see her body. They sewed fig leaves together to make coverings for  themselves. They wore the coverings when they attempted to avoid God in the garden. Was the Garden of Eden the first Mall? Could Adam and Eve select what they wanted to wear?

In God’s presence Adam blurted out, “I was afraid because I was naked; so I hid” (Genesis 3.10). In reality, Adam wasn’t naked; he was wearing fig leaf clothes. In Adam’s mind, the fig leaf clothing was adequate to cover his nakedness/shame before Eve, but, not before God.

It was Adam and Eve’s choice to disobey God, more than the act of biting into, chewing, and swallowing a fruit which introduced sin into the world. Some scholars argue that when Adam and Eve rebelled against God, they lost free will to choose to sin or to choose not to sin. Henceforth mankind would always sin.

Reflection: Do you think you can choose not to sin? Why or why not?

This entry was posted in Plants in Creation & Eden and tagged Bible Plants, Carolyn Roth Ministry, clothes, Genesis Gardening, God as a Gardener. Bookmark the permalink.