Most Jews and Christians know about Sodom and Gomorrah and other cities and towns of the plain. God destroyed these cities by fire because of the abject evil of their inhabitants. Over 500 years after the death of the cities, Israelites still remembered that God destroyed them. In his last message to Israelites before he went to Mount Nebo to die, Moses mentioned the vine of Sodom, thus, naming the city of Sodom.

I understand why Bible scholars contended that the vine of Sodom wasn’t an actual plant. In Moses’s message, verse thirty-two reads like Moses is comparing Israelites to nations and individuals who didn’t believe in—some actually rejected—the Israelite God. Moses identified believers in God (Israelites) and contrasting them with the depraved city of Sodom.

For many years, when I read Moses’s song and verse thirty-two, I didn’t believe the vine of Sodom as an actual plant. Then,  my husband and I  went to Israel to study Bible plants. We visited Kibbutz Ketura in the desert area of southern Israel. The renowned plant botanist, Dr. Elaine Solowey, is a member of Kibbutz Ketura. She and her  husband shared information on plants named in the Bible.  One of those plants was the vine of Sodom. Mr. Solowey took us out in the desert and showed us a plant named “the vine of Sodom.” There, my mind changed.

The apple of Sodom/Sodom vine (Calotropis procera) is a small tree that grows on the Sodom and Gomorrah plain and in deserts and oases in the Dead Sea area. Despite being a tree, stems run in all directions. Often, the plant is wider than tall. Three-to-four fruits hang from stems in clusters. Initially, fruit is white with a pink-purple tinge on ends. Later, fruits turn cream-colored or yellow. Fruit is attractive; however, when  pressed (or pinched), as when individuals attempt to pick them, fruit explodes in a puff. All that remains are shreds of the thin rind and a few fibers. The fruit is filled with air rather than pulp. The juice of the Sodom apple is poisonous. A mere touch of the fruit can cause severe skin irritation. 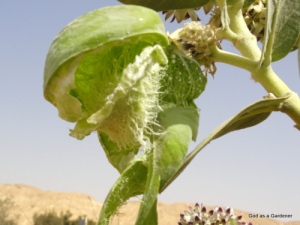 Characteristics of Sodom vine are apt descriptors for punishments that Israel’s enemies will suffer. At the same time, the vine of Sodom is a warning for Israelites who reject God. God chose  Israelites and loves them; but God is just. If any Israelite (present day Jews), any individual, or any nation rejects God, they will be as passing and empty as the fruit of Sodom vine.

When I tried to pick a vine of Sodom fruit and saw it disintegrate in my hand, I thought about God and Jews. I believe that God can and will continue to protect the traditional homeland of the Jewish people. In the twenty-first century, most Jews (Israelites) don’t recognize that Jesus is the Messiah and Savior. There are multiple nations and other religions that wage ongoing war against Israel, the homeland of current Israelites. Other nations’ efforts to destroy the Israelite peoples won’t succeed any more than my attempt to pick an apple from the vine of Sodom succeeded.

I’m not a Jew (Israelite). I am a Christian who lives in the United States (US). Yes, I am very blessed and as such  I have a responsibility to support Jews, who live in the US and Israel. My primary support takes the form of praying that Jews in my community, nation, and world will come to know Jesus, the Christ, as their Savior. As God directed me, I  pray for the peace of Jerusalem.

Reflection: Saturday, eleven Jews were murdered by a deranged killer in Pittsburgh. Apparently, he had negative beliefs about Jews and wanted to protect himself and his community from Jewish influence. As I pondered this event (and too many like them), my thought was that these murdered Jews will never have the opportunity to accept Christ as their Savior. The good news is that the murderer still has time to repent. We need to pray for his conversion and the conversion of Jews in Pittsburgh and throughout the world.

This entry was posted in Moses & Exodus and tagged Bible Study, Calotropis procera, Carolyn Roth Ministry, God as a Gardener, Meaning of Bible Plants, Vine of Sodom. Bookmark the permalink.

2 responses to “Vine of Depravity”