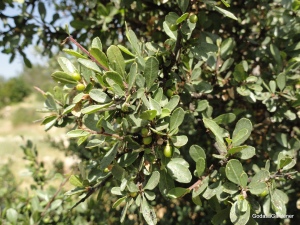 In the Sermon on the Mount, Jesus averred that a man can’t gather grapes from thorn bushes. The second time that Jesus spoke of thorns in gospels was in the familiar parable of the sower and the seed. Most of us can recite this parable:

In the first century, many farmers scattered (broadcast) seed on top of the soil rather than plow soil, scattered seeds, then re-plowed soil to cover seeds.  The challenge with broadcasting seed is that seed falls various places, i.e., on a pathway, in thin soil, among thorns. Seeds sprouted and grew; but, thorns can surround good seedlings and choke their growth. Jesus’s interpretation of seed which fell among thorns is: “As for what was sown among thorns, this is the one who hears the word, but the cares of the world and the deceitfulness of riches choke the word, and it proves unfruitful” (Matthew 13.22 ESV).

The Palestine buckthorn is evergreen.  It grows with a many-branched, tangled form, and velvety thorns.  Young stems are green; with maturity, bark turns gray. The buckthorn fruit is a small (1/4 inch), oval berry. Initially, the berry is green, but, turns black when ripe. Berries are poisonous to humans, but a good source of food for birds.

A Hebrew word for thorn is shayith1 which translates as trash, scrub, and thorn.  Trash is debris from plant materials, something worth little or nothing, and something thrown away. Trash is an excellent symbol for individuals who make a commitment to Jesus; then, quit living a Christian life because worldly cares choke their commitment. God’s judgment will fall on people who treat God and his laws as worthless, i.e., as if they are trash.  If individuals want to be something thrown away like trash, God will allow them to be this way (Romans 1.28).  God will give them over to a reprobate mind.

Reflection: How do you behave in a “trashy” manner?