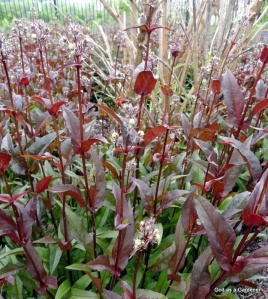 Described as robust and harsh-tolerant, it grows in wide open prairies, fields, along wood margins, etc. It is native to Canada and the entire eastern U.S. seaboard. This one grew in the Hershey, PA garden.

Penstemon digitalis is commonly called Husker red and beard tongue. I understand the red designation, however, don’t know where the beard tongue came from.

After all that Jesus went through — long days of teaching, heat and sweat, challenges from the religious elite who were supposedly looking for his coming — He can be described as harsh-tolerant. Probably the individuals who know me best, would never term me “harsh tolerant.”  When adversity strikes, my default is to whine. Often, my behavior embarrasses even me.

Reflection: How do you respond to harshness, i.e., criticism, high humidity heat, lack of safety and security? Compare and contrast your behavior with Christ’s behavior.

5 responses to “Robust and Harsh Tolerant”